On December 20, 2019, The minimum age a person could purchase tobacco products in Iowa, was raised from 18 to 21. Many hoped that raising this would ensure that older high school students wouldn't be able to provide tobacco products for their younger friends. 90 percent of American smokers reported that they began smoking before the age of 18. People hoped that raising this would help prevent young people from being introduced to tobacco products altogether. The National Academy of Medicine reported that 18-20 is the “critical period when many smokers move from experimental smoking to regular, daily use.” They reported that 46 percent of people become regular everyday smokers before the age of 18.  Another reason for it to be raised was overall health. According to the CDC 480,000 deaths occur annually as a result of smoking.

Some individuals were upset with the age being raised. Many that were 18 and already everyday smokers became upset when they could no longer purchase nicotine products. Many believe that it should have stayed at 18 because that is the age of a legal adult and people should be able to make their own decisions about their bodies. Some use the argument that if Americans can serve their country at 18 shouldn't they be able to smoke a cigarette?

I feel that raising the smoking age to 21 was a good decision. I think smoking has a lot of negative effects on a lot of people and whatever we can do to prevent it from becoming more popular is a good thing.

Do you think the smoking age should be 18? Explain why/why not. 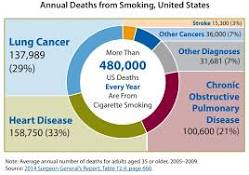 Do you think the smoking age should be 21? Explain why/why not.

Should smoking be banned altogether?

of 9 Next
This reply was deleted.